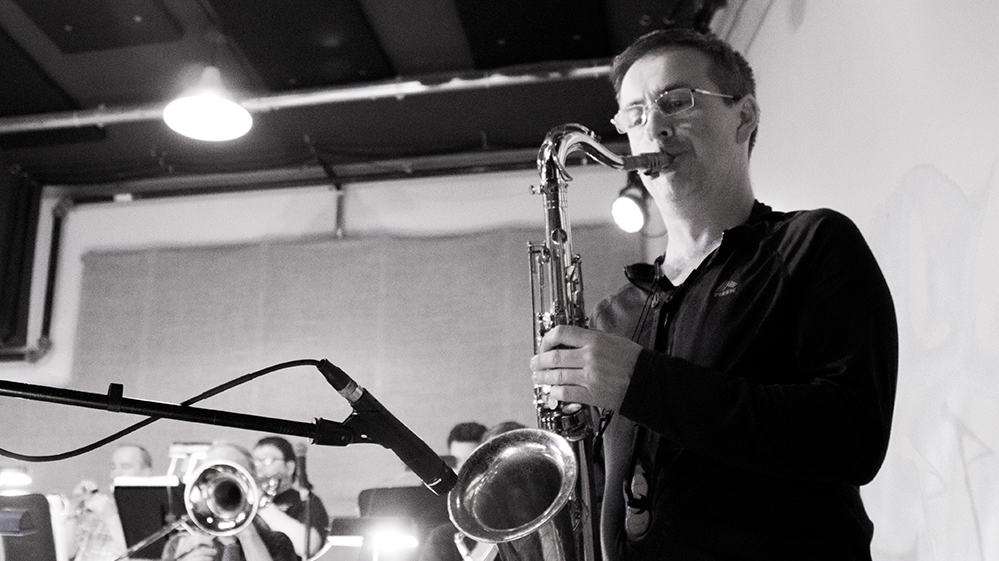 Garin Webb, an adjunct faculty member of the College-Conservatory of Music, University of Cincinnati, leads a vibrant professional life as a performer and educator in the Cincinnati area. He has performed with such luminaries as Tony Bennett, Rosemary Clooney, Ray Charles, Tommy Dorsey Orchestra, The Temptations, trumpeters Bobby Shew and John Faddis, the Cincinnati Pops Orchestra and the Cincinnati Symphony. Locally Garin can be heard performing with the Salsa band, Tropicoso; the Pop Funk and R&B group, Soulpocket; along with his own quintet Crackpot Theory. Mr. Webb maintains a very active schedule performing with several of the most recognized big bands in the midwest. He is as a member of the legendary Blue Wisp Big Band, Pat Kelly’s PsychoAcoustic Orchestra and the Cincinnati Contemporary Jazz Orchestra.

Mr. Webb is equally at home “crossing over” from the jazz and pop bandstand to the classical stage. He has performed at Music Hall with the Cincinnati Symphony Orchestra and has given classical recitals throughout the Ohio region as a soloist and chamber musician. In collaboration with Cuarteto America, he commissioned Dialogues II for Alto Saxophone and String Quartet from the late composer John Ferrito. Other commissions and dedications include Sax Songs for String Quartet with Solo Alto Saxophone by composer Arcangel Castillo-Olivari, and Serenade for Violin and Soprano Saxophone from Isaac Watras, respectively. Garin released his debut album Crackpot Theory, in June of 2012, with his quintet Crackpot Theory. In this document, the group explores original soundscapes from the anthemic and sublime to the expansive spaces and Twilight Zone of free jazz. Mr. Webb holds the degrees of Doctor of Musical Arts (2016) in Saxophone Performance from the College-Conservatory of Music; and BM in Jazz Studies from the University of North Texas (1994).